All About CBD
We research through a large number of scientific information sources to gather insights & data to write our articles. The key references can be accessed by clicking on the links within the article.
Home Hemp Benefits 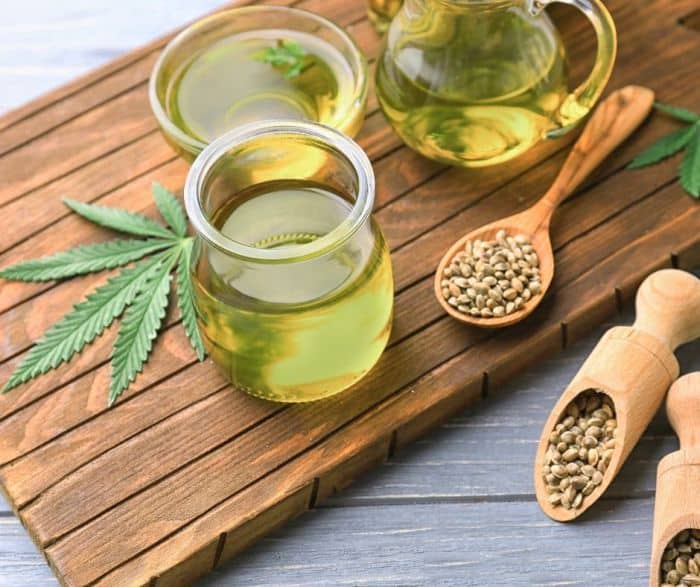 While CBD oil may be all the rage in the wellness world, it is not the first oil from cannabis to find its way to our homes.

Hemp oil has been available in local health stores long before the legalization of CBD oil and other derivatives.

But what is hemp oil, exactly? How is it different from CBD oil? Does it hold any health benefits, too? Find the answer to these and more in this detailed piece.

To Start With, What Is Hemp?

Hemp is a variant of the cannabis plant with a negligible amount (>1%) of THC, the chemical compound responsible for the psychotropic effects of marijuana.

Even though it comes from the same plant species as marijuana, the two are different in composition, uses, and methods of cultivation.

Phytochemicals found in hemp include flavonoids, terpenes, omega 3 and 6 fatty acids, cannabinoids, vitamins, among others.

Hemp is grown in many countries of the world for its edible seeds, stalks, and fibers, which have a wide range of health, food, and industrial applications.

It was even dubbed the next billion-dollar crop because of its various uses in the 1930s .

The history of hemp dates back further than you might think.

It is one of the world’s oldest plants, with concrete evidence showing that it was in cultivation more than 10000 years ago.

Ancient people consume hemp oil and seed as food in many Eastern cultures in the past.

The first recorded medical use of hemp is attributed to the Chinese Emperor Shen Hung, who used the plant to treat rheumatism and gout in 2727 BC.

Egyptians also documented the medical use of hemp for treating cataract and eyes sores around 2000BC.

Hemp is not new to the American culture, too. Early settlers arrived in boats with ropes and sails made from the plant. Many years ago, hemp was so valuable that one could use it to pay tax.

There were even laws that mandated farmers to cultivate the plant on their land .

In fact, the hemp-marijuana industry was one of the fastest-growing in the US before it was dealt a bone-crushing blow by the Marijuana tax act that came into law in 1937.

What Is Hemp Oil?

Hemp oil is the oil produced when the seeds of a hemp plant are cold-pressed.

It contains low amounts of tetrahydrocannabinol (THC), so it doesn’t give users any “high or stoned” feelings.

Hemp oil is rich in phytonutrients, such as terpenes, protein, vitamins, and polyunsaturated fatty acids (PUFA).

In its unrefined state, hemp oil has a mildly nutty smell and has little to no smell when it’s refined.

Hemp oil is a vital ingredient in many beauty products because of its skin-health benefits.

Hemp oil is more or less an umbrella term for oils that comes from hemp. The different types of hemp oil available for sale are:

Hemp oil: – This refers to the oil extracted from the stalk of the hemp plant because of its high concentration of CBD.

For hemp oil to be sold and consumed legally, the level of THC it contains must be less than 0.3 percent.

Hemp Seed oil: – Manufacturers extract this oil from the seeds of cannabis sativa. It has a poor cannabinoid profile, containing low amounts of CBD and THC.

It is, however, rich in omega 3 and 6 fatty acids, which are essential for the production of endocannabinoids.

CBD hemp oil: – This is obtained from hemp plant or cannabis in states where it is legal.

It is doesn’t produce the “high” feeling associated with marijuana and can benefit the body in many ways. It promotes sleep, reduces anxiety, relieves pain, and improves overall health.

Cannabis oil: – This one also comes from the cannabis plant. It contains different amounts of THC and CBD.

Cannabis oil is not for sale except in states where cannabis is legal because of its psychotropic tendencies.

Even though Hemp and marijuana are both from the cannabis plant, the two are not the same in chemical composition, cultivation, and appearance.

Hemp is the thinner variety with shinier leaves, while marijuana is the bushier variant with broader leaves.

The main difference between the two cousins lies in what they contain.

Hemp naturally has low levels of tetrahydrocannabinol (THC) at most 0.3 percent, whereas the level of THC in marijuana can be as high as 30 percent. So, marijuana users can experience “high,” unlike hemp users.

Additionally, hemp is easier to cultivate than marijuana, which needs to be bred carefully in a controlled environment.

One more area where hemp and marijuana are different is the law regarding their use.

While hemp is grown and use legally in all the US states, marijuana is still seen as a controlled substance and is illegal under federal laws.

Both hemp oil and CBD oil may seem like the same thing on the surface, but they are two different cannabis products.

Hemp oil, or hemp seed oil, is extracted from the seeds of the cannabis sativa, unlike CBD oil that comes from the flowers, stalks, leaves of the same plant.

One main difference between the two oils is in their cannabinoid profile. Although the two natural oils have low levels of THC, the concentration is much lower in Hemp oil.

This is why CBD oil is more effective in the treatment of various medical conditions, like depression, anxiety, seizures, etc.

Finally, the two oils are not produced the same way. The methods for producing CBD oil is known as solvent extraction.

It involves the use of solvents, such as butane, alcohol, or ethanol, to separate the components of the cannabis plant.

Hemp oil, on the other hand, is made through the cold pressing of the seeds of the plant, similar to the method used for making coconut oil.

This is another source of confusion for “canna-curious” individuals. Hemp oil and cannabis oil are two different products.

One big distinction between them is that hemp oil often contains additives, GMO (genetically modified organisms) and trans fat, whereas these compounds are absent in cannabis oil.

These natural oils also differ in the levels of cannabinoids found in them.

Hemp oil is known to have low cannabinoid content.

On the other hand, cannabis oil has a rich cannabinoid profile and therefore, offers more therapeutic benefits.

The amount of cannabinoids (CBD and THC) in hemp oil is usually too low to get you high or provide any significant medicinal benefits.

Most of the benefits of hemp oil are nutritional. Here are a few of them:

Hemp oil has an abundance of fatty acids that are important for the normal functioning and development of the body.

A good example of these is docosahexaenoic acid, which is essential for the health of the brain and other organs in the body.

One good benefit of hemp oil is its ability to keep the immune system firing on all cylinders.

The fatty acids in hemp oil support the growth and proliferation of healthy bacteria in the GIT.

Research has indicated that these bacteria can get the immune system working at full potential.

Hemp oil is an alternative to fish oil

However, this oil can be very high in mercury, a potentially harmful substance.

The good news is, hemp oil contains nearly the same level of omega 3 fatty acids as fish oil and is free of mercury.

Hemp oil is an “in” thing in many beauty products for this reason.

It helps keep the skin supple and moisten by preventing the evaporation of water from the skin surface.

Thanks to its anti-inflammatory and antioxidant properties, hemp oil can also delay the aging process and soothe rough, damaged skin.

Another essential fatty acid found in hemp oil is an omega-6 fatty acid.

This compound promotes heart health and prevents degenerative conditions in the heart and other organs of the body.

Hemp oil is good for the nails and hair

The fatty acid molecules in hemp oil play a key role in the health and overall well-being of your nails and hair.

They stimulate the production of keratin, moisturize the scalp and nail beds, and prevent hair breakage.

Hemp oil is, therefore, a good supplement for people with dry scalp or brittle nails.

One of the components of hemp oil, gamma-linoleic acid (GAL) helps the body to maintain a good hormonal balance.

As such, hemp oil can provide relief for people with premenstrual syndrome and alleviates the pain and cramping of menstruation.

Hemp oil has a wide array of applications.

Below are the methods you can use to enjoy the benefits of this perfectly balanced natural oil.

Topical use: – This is the most recommended option if you want to use the oil to treat skin conditions like acne, eczema, and so on.

It involves the smearing of hemp oil (preferably diluted with coconut oil, or olive) on the skin.

Users are advised to first try a patch test to be sure they won’t get any adverse reaction before using the oil.

Oral use: – Ingestion is another common way of using the oil. Hemp oil benefits the skin as well as other parts of the body when taken orally.

There’s little to no chance of skin irritation with this method, although users may experience digestive upset

Side Effects of Hemp Oil

Although it is generally safe when used in moderation, hemp oil also has its possible side effects. Here are some of them.

Gastrointestinal distress: – This is one of the most common side effects of hemp oil consumption.

Therefore, people with GIT conditions, such as irritable bowel syndrome, should seek their doctor’s approval before taking hemp oil.

Can be slightly psychoactive: – While the level of THC in hemp is usually considered too low to give users a “high” feeling, this is not true for those who are overly sensitive to the oil.

Note that the chance of experiencing this side effect is very slim.

Drug interactions: – Hemp oil may interfere with the metabolism of certain medications. For instance, when taken together, hemp oil can lower the effects of hypertensive drugs.

So, consult your doctor before taking the oil if you are on any medication at all.

This is why people with blood clotting deficiencies should avoid hemp oil or seek their doctor’s opinion before taking it.

Peroxide production: – The polyunsaturated fats in hemp oil break down to produce peroxides when it’s heated above 121 degrees Fahrenheit.

Exposure to this harmful compound can cause severe damages to your skin and other organs.

Hemp oil is a popular natural oil derived from the hemp plant.

It is very rich in essential fatty acids, vitamins, and other phytonutrients, which are responsible for its health-promoting benefits.

It also contains trace amounts of cannabinoids – too little to make users high.

Hemp oil has a wide range of applications, from cooking to skincare products. And it is safe for human consumption when taken in moderation.

Hemp Oil for Cancer : Does It Really Help?

Hemp Oil for Cancer : Does It Really Help?