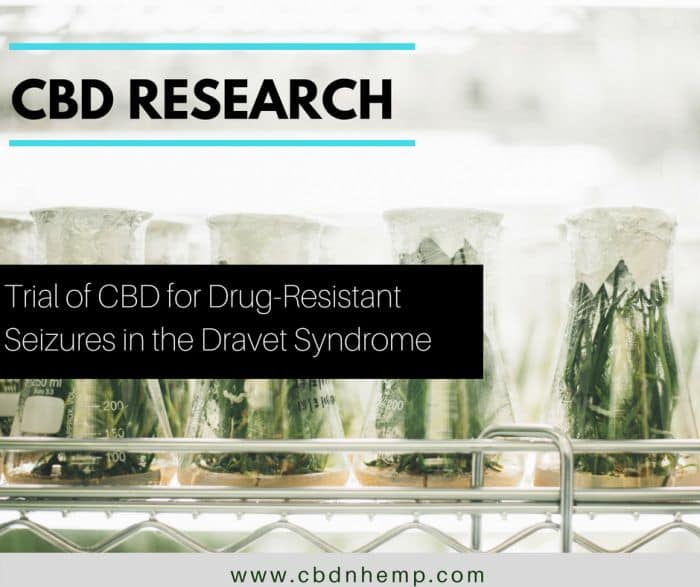 The world of science is growing every day, thanks to new studies conducted in every field.

One particular branch of research is dedicated to the wonders of a compound called cannabidiol, or CBD.

It is an extract derived from the species Cannabis sativa L, the only species out 13 species which is documented of the Cannabis.

CBD is the extract that doesn’t cause any euphoria or hallucinations, unlike its counterpart, marijuana.

What is Dravet Syndrome?

A person suffering from Dravet Syndrome usually shows signs of the Syndrome first at 18 months of age. It manifests itself as fever-triggered seizures.

It is unresponsive to treatment and worsens due to anti-epileptic drugs.

An infant suffering from this syndrome experiences motor difficulty, speech retardation, and stunted cerebral development from around 2 years of age.

This trial was a double-blind trial, which means that doses of CBD were alternated with placebo without informing the patient as to what he/she is being given.

The change in convulsive-seizure frequency over a 14-week treatment period compared to a 4-week baseline (initial) period was considered the endpoint of this trial.

The median of the frequency of convulsive seizures per month decreased from 12.4 to 5.9 with CBD administration, compared to a downward curve in the median frequency of seizures from 14.9 to 14.1 with placebo.

The median difference between the cannabidiol group and the placebo group in the change in the frequency of the seizures was adjusted.

This means, if the same population is sampled on numerous occasions, using various parameters, similar results would be obtained in 95% of the population. The confidence interval was from -41.1 to -5.4, maintaining a p-value of 0.01.

Out of the seven categories in the Caregiver Global Impression of Change scale, the patients’ overall condition improved by at least one category in 62% of the cannabidiol group as compared with 34% of the placebo group, maintaining a p value of 0.02.

Caregiver Global Impression of Change scale is a tool for the non-researcher clinician to quantify and track patient progress and treatment response over time.

5% of the patients became seizure free with CBD and 0% with placebo (P value maintained at 0.08).

Adverse effects such as diarrhea, vomiting, fatigue, pyrexia, somnolence, and abnormal results on liver-function tests were seen more frequently in the CBD group than in the placebo group.

Diarrhea is the expulsion of watery stools from the body. This happens when the gastrointestinal tract of the body is not able to absorb water properly from the food ingested.

Fatigue is the feeling of tiredness or lethargy, usually makes the person want to sleep.
Vomiting is the forceful expulsion of semi-digested or undigested food through the mouth.

Unlike popular belief, this is not due to reverse peristalsis of the oesophagus.
Somnolence is nothing but fatigue causing.

Pyrexia is nothing but the medical term for fever, pyrexia is when the body temperature increase to above normal, which is 37°C.

More people withdrew from the trial from the CBD group.

CBD was highly instrumental in reducing seizures in patients with the Dravet syndrome in comparison with placebo while causing adverse effects.

It reduced convulsive seizures in some patients by almost 50%.

Although, it caused many side effects like diarrhea, vomiting, fatigue, pyrexia, somnolence, and abnormal results on liver-function tests.

Even though Dravet Syndrome causes epilepsy which is drug resistant, CBD holds some hope for the people suffering from this syndrome. Where western medicine couldn’t work, cannabidiol shows scope in the management of epilepsy in such patients.

Research Study on CBD and Patients with Dravet Syndrome