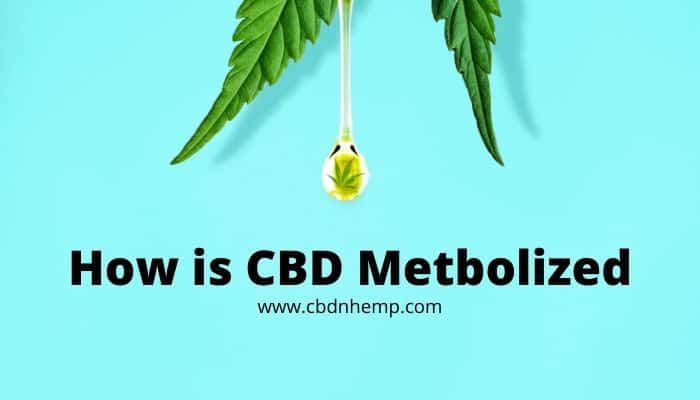 In Brief: How is CBD Metabolized?

The metabolism of CBD depends on the dose of CBD, the route of administration, and bioavailability. As CBD moves through metabolic processes, it is converted in the liver to a wide range of metabolites that are excreted through the biliary system. More pharmacological studies are required to understand the different metabolites formed and its clinical significance in the body.

Cannabidiol, CBD, is one of the active phytocannabinoids isolated from cannabis plants.

It is vital to study the pharmacokinetics and metabolism of CBD to elucidate the different physiological functions of CBD.

Therefore, this article will review the absorption, distribution of CBD to its site of action, and metabolism of CBD in the liver.

How is CBD Metabolized?

The metabolism of CBD depends on the route of administration, its dose, the amount of drug that enters systemic circulation after the first-pass metabolism, and drug interactions.

There are different methods of consuming CBD. The route of administration will determine the rate of absorption and pharmacokinetics of CBD.

The most common method of administering CBD is the oral route. The different oral CBD products are capsules, pills, and edibles.

Upon ingestion, CBD is absorbed by the digestive system, and from the stomach, it enters the liver through the hepatic portal system.

In the liver, it undergoes extensive phase I metabolism and forms metabolites. The remainder of the CBD passes onto the bloodstream to be distributed to the target tissue.

Studies showed that bioavailability through the oral route is very low, about 13-19%.

The mean half-life of CBD after chronic oral administration was 2-5 days, indicating that their effects may last longer.

CBD is inhaled through vaporization or smoking. It is heated to a specific temperature, the vapours formed are inhaled, and the CBD is absorbed in the lungs.

The CBD molecules bypass the first-pass metabolism and are immediately transferred to the bloodstream from the lungs.

The bioavailability of CBD following smoking is estimated to be 31%, and the onset of action is rapid.

Another effective method of administering CBD is the sublingual route, where the drug is held under the tongue for 60 seconds and swallowed.

It enters the bloodstream through the tiny blood vessels under the tongue.

This method completely bypasses the digestive system and the first-pass metabolism, thereby increasing the bioavailability.

Topical and transdermal patches: It involves the application of CBD to the skin ointment. It avoids gastrointestinal administration and first-pass metabolism.

It may interact with receptors on the skin and produce a local effect. It does not penetrate deeper areas.

Transdermal patches placed on the skin surface may release small amounts of CBD that penetrate skin layers and reaches the bloodstream.

Distribution and Mechanism of Action

Cannabidiol is then transported throughout the body to its site of action via the systemic circulation.

It may accumulate in the adipose tissue with chronic use.

Different research studies showed that CBD might help in reducing symptoms of epilepsy, anxiety, depression, chronic pain, and insomnia by interacting or influencing these receptors.

The CBD is metabolized by cytochrome P450 enzymes in human liver microsomes.

Phase I metabolism include oxidation reactions of CBD. The most abundant metabolite was hydroxylated 7-COOH derivatives of CBD, and the minor transformation products were 7-OH-CBD, 6-OH-CBD.

Phase II metabolism involves the subsequent addition of glucuronic acid to the metabolites. The glucuronide conjugates formed are then eliminated from the body.

However, a study showed that a large portion of the CBD is excreted without any change.
CBD also may act as a competitive inhibitor of cytochrome P450 enzymes depending on the dose administered.

The studies showed that CBD could interfere with the metabolism of other drugs, including THC, omeprazole, risperidone, and diclofenac.

The pharmacological studies about the metabolites of CBD and its activity in the body are very scarce, and therefore, more studies are required to understand the significance of the metabolites.

The unchanged CBD and conjugated metabolites are eliminated via urine and faeces. The main excretory pathway is the biliary system.

A study with oral CBD (750mg, 1500mg twice) showed that CBD elimination was multiphasic, and termination elimination half-life was 60 hours.

In recent years, cannabidiol is widely studied for its role in treating different conditions including, chronic pain, anxiety, insomnia, and depression.

Therefore, it is vital to understand the metabolism of CBD, different metabolites formed, and its influence on physiological functions.

The available studies showed that CBD is primarily metabolized after administration by cytochrome P450 enzymes in the liver.

More pharmacological studies are required to understand the metabolism of CBD, the different target tissues involved, and the clinical significance of metabolites. These future studies will help in investigating the therapeutic potential of CBD.

The Difference Between Hemp Oil and CBD Oil