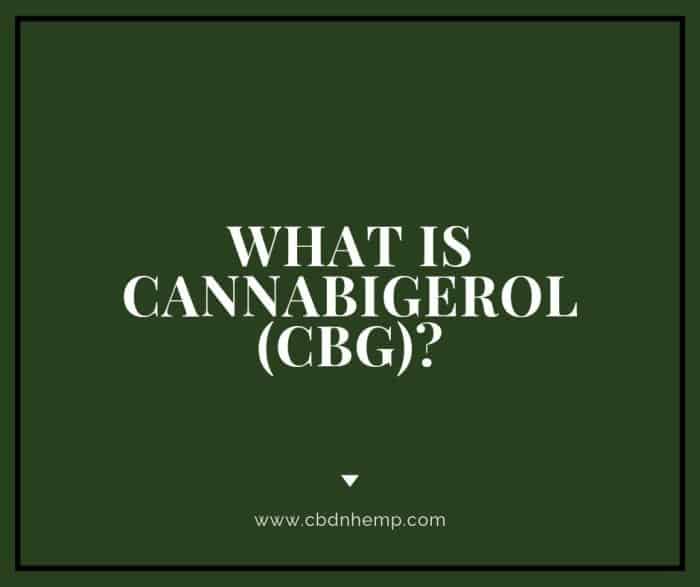 When you first start reading up on the medical benefits of Cannabis, you will definitely find plentiful information on THC and CBD.

As you dig in further, you will realize that the world of Cannabis has quite a lot more to offer.

Cannabis’s journey in pharmaceuticals began with hemp, continued to CBD and is now taking a new path with cannabigerol (CBG), cannabinol (CBN) and cannabichromene (CBC).

CBD, CBG, CBN, and CBC can all be grouped together into a class of chemicals known as cannabinoids. All 4 of these cannabinoids are found naturally in hemp plants.

CBD has gained massive popularity in a short span of time for its robust anti-oxidant and anti-inflammatory properties.

Clinical trials have proven CBD to be an effective therapeutic tool for epilepsy, cancer, arthritis, psoriasis, and eczema.

Cannabigerol (CBG) demonstrates promising anti-oxidant, anti-inflammatory, anti-microbial, and pain-relieving properties. CBG may as well be considered a first-cousin of CBD.

Before we dive into further details about the health benefits of CBG and how it can be obtained, let’s take a brief look at the chemistry underpinning CBG’s activities in the human body.

Cannabigerol (CBG) is one of the 60 to 80 different cannabinoids found naturally in hemp plants. Generally, CBG makes up only 10% of the cannabinoid content in a hemp plant; with THC and CBD chemicals being the most abundant cannabinoids.

However, certain hemp strains have been identified to provide very high amounts of CBG.

This includes the southern Italian and Ukrainian varieties, in which CBG forms an astonishing 85% of the total cannabinoid content. [1]

If you were to take a hemp plant from the field and look for CBG, you would find almost none of it. This is because hemp plants store CBG in a different form.

They store it as an acidic precursor which, is referred to as CBGA. [2]

CBGA will break down to CBG in the presence of heat – usually, temperatures above 105  are required for this. [3] These can be achieved by special industrial processes.

CBG itself is a direct precursor for THC, CBD, and CBC. The hemp plant will continuously convert its intrinsic CBG to mostly CBD and THC during its life.

The plant will use a different set of chemical reactions and biological catalysts (enzymes) to convert CBG to each of its different forms. [4]

CBD, THC, CBG, CBN, CBC all follow a general chemical structure. They have a 6-membered aromatic carbon ring with a single oxygen-hydrogen group attached to it.

The ring has one other side chain in all 5 cannabinoids. The structure and chemical formula for this side chain change across each cannabinoid.

Cannabis plants can be grouped into 2 sub-categories: hemp and marijuana. Plants with more than 0.3% THC are known as marijuana.

Whilst, plants with less than 0.3% THC are hemp. You may be wondering why this distinction between marijuana and hemp is made on the basis of THC.

THC is responsible for inducing the feeling a ‘high’ from marijuana. [6] It is an intoxicating substance which, is banned in all parts of the world.

The amount of THC in hemp is insufficient to cause a ‘high’ and thus, hemp is widely utilized for the medicinal benefits of the other cannabinoids it carries.

CBG is one of these. It does not invoke any intoxicating or psycho-stimulating effects. [7] CBG exerts its effects via the endocannabinoid signaling system.

It can do this because it closely resembles the cannabinoids produced naturally in the body.[8]

The way CBG works is by binding to a receptor of the endocannabinoid system known as CB1. CB1 receptors are scattered throughout the body. [10]

CBG can reach all parts of the body, from the eyes to the toes, and this allows its therapeutic value to magnify significantly.

A very important turning point for the future of cannabinoid products came after a 2015 mice study conducted in Israel. [11]

The scientists found that CBG and the other cannabinoids found in hemp can improve the anti-inflammatory and anti-oxidant effects of CBD.

The cannabinoids can all act together in a manner termed as the entourage effect which, can increase the medicinal value of CBD dramatically.

On the basis of their results and following investigations, scientists concluded that it was better to consume CBD products enriched with other natural hemp cannabinoids rather than consuming just pure CBD.

How is CBG Extracted from Hemp?

The reason why CBG is found in quite small quantities in hemp plants is that further into the plant’s life, much of the CBG is converted into other cannabinoids.

So, to extract maximal volumes of CBG, the hemp plant must be harvested early on. CBG manufacturers snip off hemp plants as soon as they reach the budding stage. [13]

Hemp plants can be grown outdoors or indoors in greenhouses. CBG producers cross-breed their hemp plants in such a way that some of the plants accumulate the gene which, codes for CBG.

This can increase the concentration of CBG in these plants. [14]

To extract the CBG, first, the plant is ground up and dried. Then, the cannabinoids are extracted using carbon dioxide gas.

To separate CBG from the other cannabinoids, multiple rounds of different types of chromatography and recrystallization are done. [15]

The final CBG product forms a cream-colored solid. This is called a CBG isolate. It can have a CBG concentration of up to 99% which, would make it the purest form of CBG.

A review article published in the Journal of Cannabis Therapeutics clearly highlighted that the health benefits of CBG all stem from its anti-inflammatory, anti-microbial and anti-oxidant properties. [16]

In animal experiments involving mice, CBG was seen as a highly promising anti-depressant.

CBG is being explored as a novel treatment for glaucoma after it showed to relieve intraocular pressure in the eyes. [18]

CBG can activate endocannabinoid receptors in the eyes and reduce nerve damage. [19]

The robust anti-oxidant and anti-inflammatory effects of CBG make it a promising candidate for the treatment of inflammatory bowel disease. [20]

In mice models for this condition, CBG normalized inflammation levels freed the immune system from stress and prevented intestinal damage. [21]

CBG has proven to be an appetite stimulant in mice studies. One-third of cancer deaths can be attributed to chemotherapy-induced weight loss. [22]

CBG can reverse such effects by potentially increasing the frequency of meals in patients.[23],[24]

The neuroprotectant properties of CBG helped with brain damage in mice models of Huntington’s disease.

The aggressiveness of breast, prostate, colorectal, leukemia, gastric, thyroid, and glioma cancer cells was reduced after treatment with CBG in a laboratory study. [26],[27]

CBG is highly desirable for the treatment of psoriasis as, it can regulate the overproduction of skin cells and soothe the inflammation seen in this disease. [28],[29],[30]

Since the anti-microbial properties of CBG were found to be strong enough to overcome antibiotic-resistance in Staphylococcus aureus strains, CBG is being explored as an alternative treatment to antibiotics. [31][32]

This group of bacteria is known to cause a variety of serious respiratory diseases.

In addition to the benefits mentioned above, CBG can help with the symptoms of bladder dysfunction disorders, bone formation, and bone healing. [37],[38]

The Different Ways of Consuming CBG

CBG products will generally contain small quantities of other cannabinoids, like: CBD, CBC and CBGA. They can enhance the medicinal benefits of the product.

A CBG isolate can be consumed as it is, or it can be processed into another product. To consume the isolate on its own, you can dissolve it in water and drink up the solution or you can add it to food.

The isolate can be turned into CBG gummies. People may prefer gummies as they will be more flavorful and consumed like a snack at intervals throughout the day.

CBG isolates can be added to cosmetic and topical formulations.

These formulations may be a face cream, a hand cream, a shampoo, a conditioner, a body wash, a deodorant spray, a lip balm, an eye cream or a face wash. [39]

For skin conditions, some people find topical applications more effective than oral supplements. So, for psoriasis, you could try a psoriasis treatment cream or CBG capsules.

The cream can offer quick localized relief when applied directly onto damaged areas of the skin.

CBG isolates can be transformed into a CBG tincture by dissolving the isolate in a carrier oil and ethanol.

A tincture is placed under the tongue from where it can rapidly be absorbed into the bloodstream. [40]

Oil-based capsules are more desirable for overall health benefits and when the disease is not related to the skin i.e. cancer and inflammatory bowel disease.

For a CBG product to be legal, it must not contain more than 0.3% THC. Always check the product label for THC concentration, especially as consuming THC can lead to highly negative effects.

The US FDA has not yet approved CBG isolate for medicinal use. This is due to the lack of clinical results on the safety and efficiency of CBG across a range of different diseases. [41]

CBG products are available for self-initiated use. If you are planning to use a CBG product, consult a doctor for first.

They can better advise on which product type is suitable for your needs.

We advise you to start with low doses (5 – 10 mg/kg) and then slowly increase it if you are experiencing positive results. [42] Consult a doctor for more tailored advice on dosage.

Inflammation contributes to the development and progression of many diseases.

Thus, the potent anti-inflammatory effects of CBG make it a promising therapeutic tool against a wide array of conditions.

Be sure to consult a doctor for dosage and further information on the method of consumption before purchasing a CBG product.

The CBG found in hemp is naturally converted to other cannabinoids, including the famous CBD and THC.

Plentiful research has been done on the medicinal benefits of CBD and this has provided strong headway for further research on CBG.

Nonetheless, there are online websites already selling CBG products. The products come in the form of: gummies, oils, solids, tinctures, lotions and more.

Future clinical trials investigating the safety and efficiency of CBG will allow this cannabinoid to also become a popular supplementation to traditional treatments.